I caught this story on The NBC Nightly News before we left on our trip. Just sharing it here. If the video below is not showing, the video came from the NBC website here. 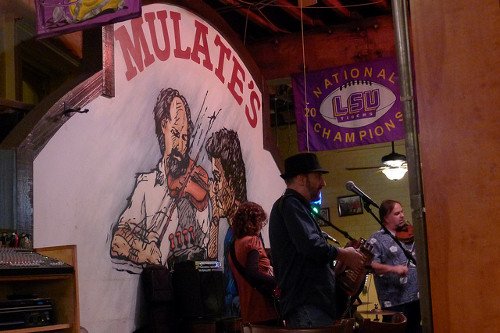 There we are having a nice day on the waterfront of New Orleans. Then, while waiting in line for tickets at the aquarium, I get a series of alerts saying something to the effect of, “Tornado Warning. Get your butt indoors.” No jokes here since some folks in New Orleans East and cities to the West lost their homes and belongings from the series of funnels that touched down. Our prayers are with them all.

While we waited for a serious downpour to pass, we stayed inside of the aquarium which means we had to eat what was available in their food court. One place served peanut butter and jelly so that was definitely out, but they did have a Papa John’s which is on my safe list of places to go. They confirmed that they were still safe before we ordered (heck with you, place that rhymes with Hizza Put), so that was lunch. It was a pizza. Here is the Papa John’s Allergen Menu.

Dinner was much more interesting. We returned to Mulate’s, a restaurant where we had our first taste of New Orleans cuisine many years back. The prices were higher, but the food was still incredible. The server was very helpful, but we had also researched ahead of time and we had received a response to an email. It should probably be noted that when we arrived, we were the only customers in this huge restaurant (and yet, the next people who arrived were seated right next to us - go figure). They do get really busy especially when there is a band. The server told us to stay away from the deserts, but they are kept separately and are never handled in a common preparation area.

We went tapas-style and ordered almost every appetizer on the menu. So far, so good in terms of reactions. Unfortunately, we were way too early for the live music and dancing. One of our fondest memories from our previous trip was a gentleman of a certain age who would walk slowly through the restaurant and ask young women to dance to the zydeco music. By the time he would guide her back to the dance floor, the song would be mostly over.

As stated, deserts should be avoided so it was back to Cafe Du Monde for us.

Bottom line: Mulate’s is highly recommended based on our experience today, but you should always do your own research. When I first started researching peanut allergies, I found a ridiculous amount of information on the Internet with some being seemingly dangerous and irresponsible. Yet, these resources either have a lot of links pointing to them or they found the one genuine Search Engine Optimization (SEO) person on the planet who helped take them to the top of the search engine results.

I beg you, I implore you to start with a foundation of solid medical evidence before branching out into the…um…more interesting treatments and theories. The Peanut Allergy Answer Book is now in its third edition. According to the updated description, the current edition includes:

The author, Michael C. Young, MD, has quite the resume. Sorry, an ultra-respected person like this doesn’t have a resume - they have a curriculum vitae so they must have a brain full of evidence-based research.

I hope that you will start with this book or a similar one, and then you can feel free to look into services like one in Portland where a provider will travel back in time to fix the issue you had in your past life that has now led to this peanut allergy. You think I’m making this up?

Buy now from Amazon or be really cool and choose to buy it from BetterWorldBooks. Make sure you are getting the current edition.

There are times that everything just comes together perfectly when eating out with a food allergy. We were fortunate enough to have one of those experiences at the Daisy Dukes Express restaurant here in New Orleans. The staff was extra friendly and assured us that they would everything would be prepared in a safe manner for someone with a peanut allergy. Then, the food was incredibly good. We didn’t have to worry about the use of peanut oil (I know, I know, you may never have to worry about it) since everything we were getting would be fried in butter. Yuuuuuuummm.

In some reviews of the place, it appears to be a favorite hangout after a night of drinking for some groups so you may get some interesting folks there in the early morning.

Like I say in the disclaimer, do your own research in terms of safety, but we had a top-notch experience at Daisy Dukes in New Orleans. 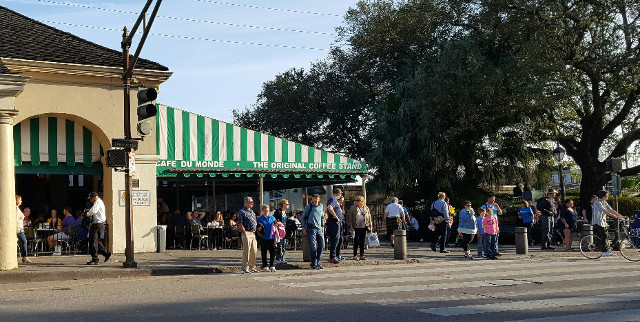 In researching safe places to eat on this trip, multiple forum users have reported that the world-famous Cafe Du Monde has responded to their email inquiries stating that their operation is completely free of peanuts and tree nuts. They really only make beignets (a small pastry covered in 14 pounds of powdered sugar) and coffee. If you have concerns, I strongly suggest that you go the email route ahead of your visit since the servers, many of whom have a language barrier, are insanely busy moving the thousands upon thousands of tourists through the tightly packed collection of tables.

We have thus far had about six beignets each without a reaction so we will likely only eat beignets for the remainder of our trip.

I used to love peanut butter. I even tried to keep a stash of peanut butter cups for an afternoon treat. Peanut butter and natural fruit spread sandwiches were my go-to when I didn’t feel like going to the store. Now that the house is peanut and nut-free, it was an adjustment to say the least.

Then, I found out about this sunflower butter stuff that is really, really good. In fact, I like it more than I’ve ever liked peanut butter. If only we can convince Hershey’s to create a sunflower butter cup, all would be good in the universe.

I’ve only ever tried the SunButter brand below. I know that Trader Joe’s is supposed to have their own brand, but our local store doesn’t carry it. 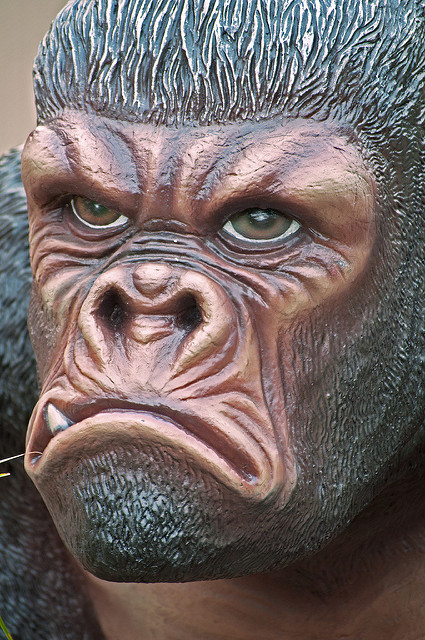 We were out on the town using the New Orleans streetcars so we ended up way outside of the French Quarter when it was time to eat. While in a beautiful neighborhood full of unique little coffee shops and restaurants, we were in the position where we didn’t have a listing of “safe” restaurants from which we could choose. We walk into a coffee shop - you know the ones - where hipster looking young people are very slowly sipping the house coffee but are mainly there because they don’t want to pay for Internet in their own apartments because they don’t want to have to explain to their loud-music-playing-cereal-stealing-semi-retired-while-still-in-their-20s roommates that they won’t be sharing the wi-fi password. Yeah, I’m stereotyping.

The shop, which shall remain nameless, was genuinely concerned about the allergy but didn’t feel comfortable because of the shared surfaces and the fact that the bread comes from a fancy-schmancy artisan bakery and they don’t know enough about their practices. Darn it. I’m sure that we’re all familiar with that answer. We were able to get a bowl of fruit and the potato salad and a mocha which apparently just came out of a box and they add whip cream to it.

I know perfectly well that the universe does not revolve around us. Peanut and nut allergies are becoming more common and I’m sure that coffee shops and restaurants will catch on to the fact that providing a safe environment is a business opportunity.